By 2030, the population of Sochi will be 630 thousand people 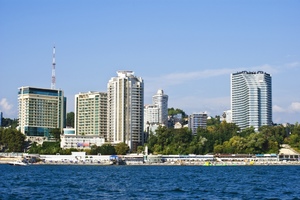 If you believe the forecasts made by the city authorities, then in 2030 Sochi will be 630 thousand. Such indicators were reported by Leyla Gandaloeva, Deputy head of the Department. Mainly residents be migrating Russians and visitors from the neighbouring places of Krasnodar region. In addition, the Sochi hospital every year to announce the arrival of 6-7 thousand new residents per year.

According to the research, the dynamics of growth encourages to reschedule the volume of medical care provided to the urban population.  In addition, it is now important to correctly distribute the construction of preschool institutions, schools, organize traffic (including a network of taxis) and calculate the amount of consumption of public services.

According to the data provided, today the resort town is home to just over half a million people. Age 310 thousand of them-from 18 to 60 years. These are able-bodied citizens, most of whom work officially. It is reported that Sochi has the lowest unemployment rates in Russia.